Boost Confidence. Increase Marks. Get Ahead.

Boost Confidence. Increase Marks.
Get Ahead.

Why parents choose SplashLearn for their Year 4 Children?

Add Fractions (Sums up to 1) 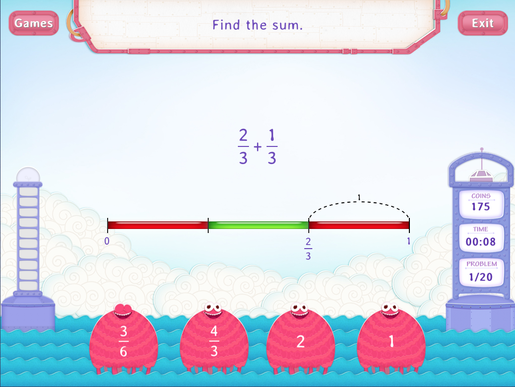 - Form a visual understanding of adding fractions with like denominators with the help of fraction bars and number lines.

- Learn to model an addition sentence of like fractions by coloring blocks to represent the sentence.

- Gradually move on to identifying the missing numbers in an addition sentence without relying on visual models.

To figure out how much of a pie is eaten if two people eat, say, 1/4 and 2/4 of it, we need to add the two fractions. Similarly, to calculating how much gas was filled in if we put in 1/3 of a gallon on a day and 2/3 on the next, we add the two fractions. While operations with fractions may come naturally to adults, children, too, can easily master these concepts if they grasp the fundamentals well.

The ancient Egyptians only used fractions of the form ‘1/n’. So, any other fraction had to be represented as a sum of such unit fractions!

I want to use SplashLearn as a...

Parents, we need your age to give you an age-appropriate experience

Sorry, we could not process your request.